Almost everyone has heard of the world's famous air-dried ham named Jamón de Pata Negra, also known as Jamón Ibérico de Bellota? What makes this ham so special is its origin. It comes from the Iberian hog, which is commonly known as "black pig".

The Iberian hog is a semi-wild breed and mostly in south-western Spain (Andalusia, Extremadura) and Portugal (Alentejo) at home. 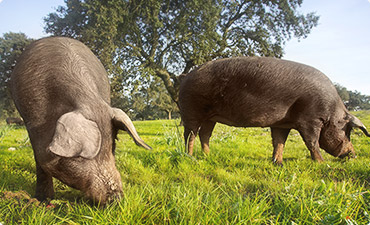 Characteristic of the "Cerdo Ibérico" (its Spanish name) is that it is almost exclusively kept in nature. These half wild pigs with their typical black bristles live carefree in cork oak and holm oak woods and feed on acorns, grasses and herbs.

This particular nutrition of the Iberian hog gives its meat a unique nutty flavor. Grazing with generous space also ensures that valuable fat is stored in the animal's muscles. This gives the meat a healthy, marbled texture, as it is also known from the famous Kobe cattle.

The Iberian hog is perfect for our dry dogfood, because its flesh has a number of outstanding properties: it is particularly low in cholesterol and has a high content of unsaturated fatty acids. Among others it also contains folic acid, vitamin E, and B, as well as numerous minerals such as copper, iron, zinc, magnesium, calcium and phosphorus.